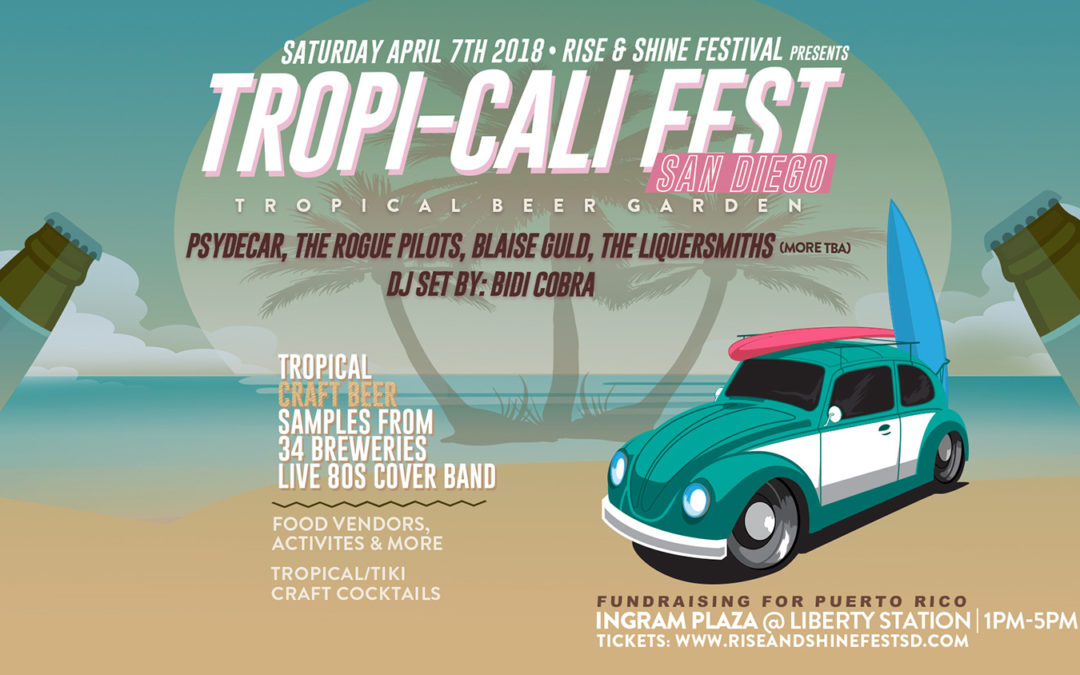 TROPI-CALI FEST SAN DIEGO is a fun interactive RISE+SHINE event celebrating the best So-Cal Tropical beer, food, and cocktails in San Diego. 34 local breweries will be serving complimentary samples of their iconic beers including some summer specialties and seasonals. 15 of the best restaurants/Food trucks will be serving signature items and more. Live music will entertain the crowd and get the party people dancing. 21+ event.

This Festival is hosted by Getchargedup, a new and unique events social enterprise with a non-profit mission to empower people by unlocking access to energy, education, while respecting the environment. Proceeds from Tropicali-Fest will support the #EmergencyPower initiative that will help bring power to clinics in Puerto Rico.

BEER! BEER! BEER!
Taste Samples of craft beer from 34 of the hottest local brewries in town inclduing some summer specialites.

Psydecar
Psydecar is a renowned professional San Diego Lovers Rock, Acid Jazz, Latin Funk, Soul band. Their upbeat solid rhythms, smooth melodies and harmonies will keep you dancing while melting your soul. Psydecar is an incredible multifaceted team of some of the most talented and seasoned musicians in SoCal. Psydecar is led by Timothy Pacheco, an accomplished Southern Californian music virtuoso who has been on the music scene for over 25 years. Pacheco is an exceptionally brilliant composer as well as a multitudinous musician. He is an articulate artist who does not necessarily conform to one genre of music. During his career he has traveled around the world performing in acts such as P.O.D., Natural Vibrations, Big Mountain, Wise Monkey Orchestra, and his own bands Psydecar and Southtown Generals.

The Liquorsmiths
The Liquorsmiths (formerly Second Tuesdays) are a Folk Rock group born from a collision of contrasting ideas, styles and musicality. They been described as Wilco meets Neil Young meets My Brightest Diamond, but retain a style all their own. Formed in early 2006, members and contributorshail from all over the United States (San Francisco, CA, Denver, CO, Phoenix, AZ, San Diego, CA, and Atlanta, GA), utilizing technology in various forms to collaborate before meeting periodically to tour their newest material throughout the world.
Although notoriously an underground project by in large, performing and releasing material as bonus/secret tracks accompanying various other project releases, founding
members Andrew Thams and Ryan Fisher have recently made moves to bring the group to the forefront of their focus.
The newest single “Devil I Do,” has received international praise as it paves the way for their first full length album (tentatively self-titled), set for release in January of 2014.